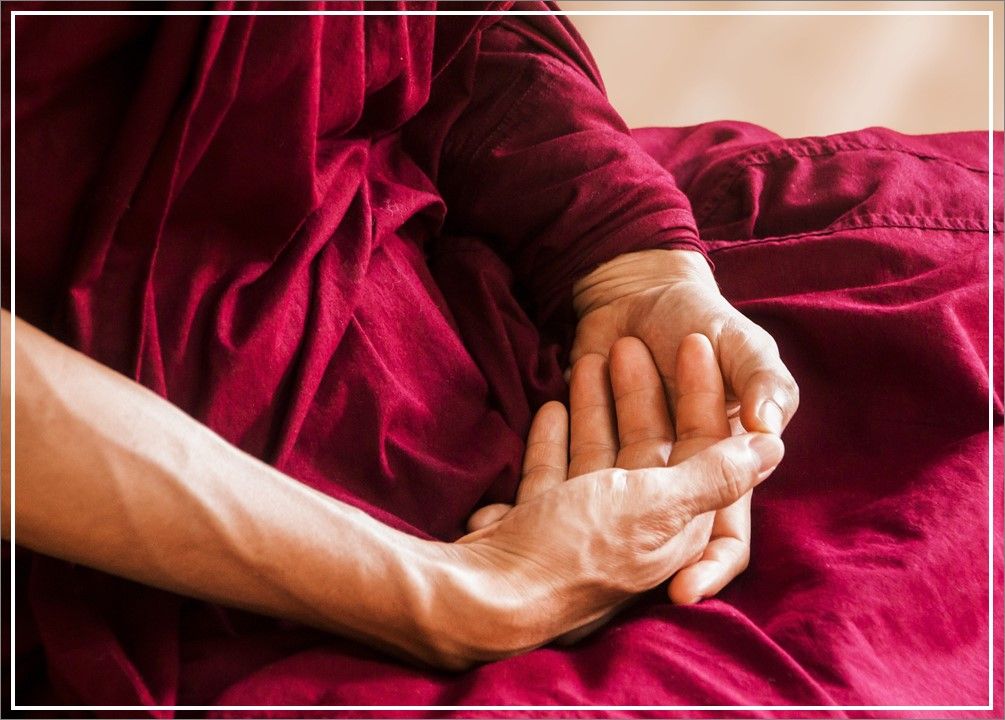 ... before you read about my experience with meditating, I just wanted to invite you to a free remote 1-question angel card reading.

When you open your heart to the angels and start to work with them, following their direction and guidance, sometimes, just sometimes your mind can come upon resistance to their nudges.

And that's exactly what happened to me.

I was using my oracle card daily to check in with the angels and to see what guidance they had for me.

For a number of days, however, the same card kept jumping out of my deck: "Meditate".

It was happening so regularly that it was difficult to not feel the nudges from the angels. But I had so much resistance to the whole concept of meditating that I kept ignoring their requests.

For me meditating was all about quietening the mind, not allowing any thoughts in; sitting in perfect peace for ages. It was a very disciplined skill that took years to master. And that just terrified me. I have such an active, busy and noisy mind, how on earth would I ever get it to quieten down? And, also, the thought of "who am I to be able to meditate?" aka I'm not good enough was ever-present in my thoughts and beliefs.

But that was all before I understood that meditation isn't the hardship that I believed it was meant to be.

That was before I understood that it's okay to have thoughts enter your mind when you're quietly meditating... everyone does. You just let them drift by like clouds..

That was before I understood that sometimes you need to allow the thoughts to come in because that's how you receive your inspiration.

That was before I understood that anyone, even me, can meditate... it just takes some practise.

The 'meditate' card was jumping out so many times when I consulted my angel oracle card deck that it got to the stage that I simply could not ignore it. No other messages were getting through becuase it was the card always jumping out. So clearly it was something the angels really wanted me to try.

I had a number of visualisation meditations at hand as a result of a course I was taking so I thought it would be an idea to start with them as I was familiar with them and someone's voice made it easier to keep my mind on track without it drifting off every possible direction.

I had listened to all the meditations while they were live and being recorded So I knoew what it was like to listen to guided, visualisation meditations. But I had never sat down on my own, just me and my noisy mind, and listened to the guided meditations as part of a daily meditation ritual.

After drawing the 'meditate' card so many times. After my resistance had eventually been chipped away by the persistence of the angels, I decided to incorporate some meditation into a daily morning routine.

For the first few times my mind would wander off and it took me quite a while to realise that it was somewhere far away from the guided meditation. But, through practise, I was quicker to spot my mind beginning to wander and I gently led it back to where it was meant to be. And each time it wandered off and I had to take it gently by the hand and lead it back, I did so with love. I wasn't annoyed that my mind had wandered, I didn't berate myself for not being able to fully concentrate on the guided mediation, I just accepted that my mind would wander and I would have to gently encourage it to return.

And gradually, slowly, my mind didn't wander so much. And when it did I was better and quicker at leading it back.

The first thing I noticed after I had been meditating daily for a while was that my thoughts , my outlook in life, they all seemed more positive. My life hadn't changed, I was still struggling with my (prior) business. But my mind and how I viewed life had changed hugely. Now I no longer felt I was falling down a dark rabbit hole when something went wrong and felt out of my control. Now I no longer spent (so many) days on end in tears, annoyed at how difficult my life had become. The changes were very subtle and not something I immediately picked up on but others noticed the change in me. Friends would say I looked different, lighter. And that opened my awareness to something changing within me. And, of course, I noticed that changes had been happening after I, inevitably, fell off the meditation bandwagon.

Yep... I fell off the meditation bandwagon. I guess you could say it was inevitable. It was a new habit I was creating for myself and something I hadn't been doing long enough to become a natural daily routine.

But falling off was actually a good thing because it was only then that I really noticed the positive difference that daily meditating was having on my life. It took me a little while to connect the dots but a few days after I'd fallen off the bandwagon, I realised that my mood was darker, challenges seemed bigger and my whole demeanour was just 'off'. I didn't initially realise that this was all happening because I'd stopped my new-found meditating practise until a friend happened to say, in passing, how different she felt if she didn't meditate for a few days. How her whole outlook changed. That's when my lightbulb went off and I realised that's exactly what was happening to me.

So I jumped back on my bandwagon and started my morning meditating practise and within a couple of days, my mindset had reverted back to the more positive and resilient mindset that had been growing inside me since I first started meditating.

The other thing I noticed through my meditation practise was that my connection with the angels changed. They started to interact with me through my meditations in ways I didn't expect (I'll talk about that in another blogpost sometime)... it was as if now they had a channel they could better connect with me through rather than hope that my random and unreliable intuition antenna was tuned in to hear them. And they were making use of that channel in some interesting ways.

Sitting her today, I am so grateful I started a daily meditation practise. When I don't meditate, I miss it. I don't feel so connected and, within a day or two, my mindset turns a lot more negative with a greater focus on fear rather than love.

I wouldn't say I'm the best meditator in the world. But I'm good enough for me. And that's the important thing. It's not about being the best at closing down your busy mind. It's not about being the best at sitting in silence for hours on end. It's about creating a practise that suits you and fits easily into your lifestyle. A practise that you know id easy to commit to and something you look forward to every day.