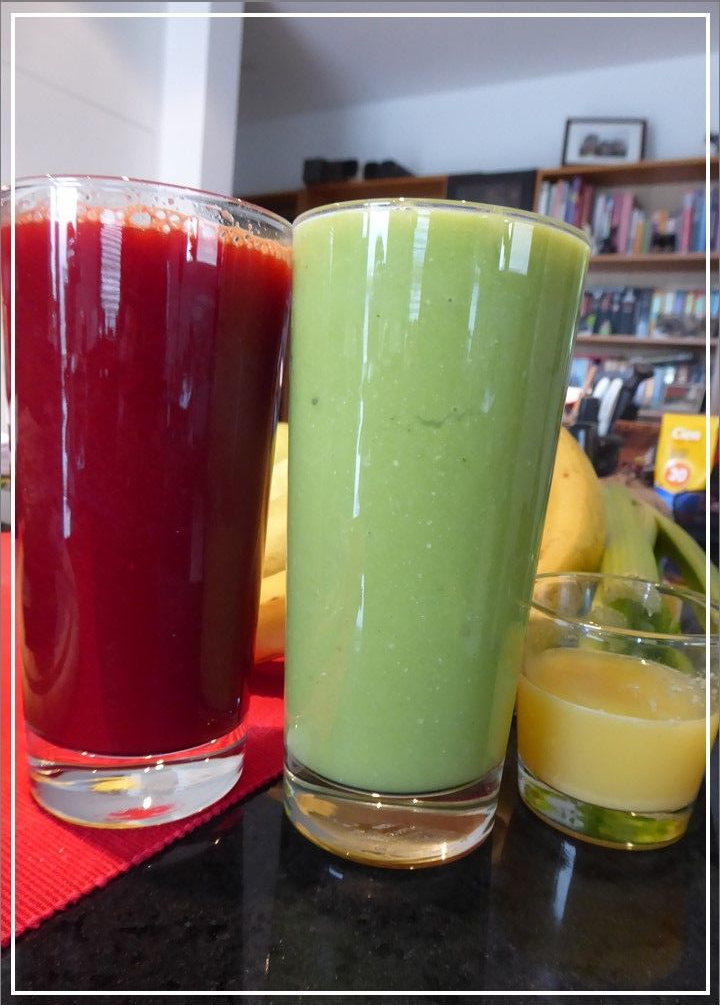 Welcome to Day 1 of my juicing diary.

Before we start, if you're wondering what this diary is all about and why I'm talking about juicing, head on over to my introductory blogpost "Taking back control", here.

Day 1 of a new adventure. I've been building myself up to today for weeks! So you'd think I'd be all gee'd up and excited, right?

I never like to use the word 'hate' but when it comes to cucmumbers that might just be the only word that works.

If someone put it in a salad, I wouldn't be able to enjoy the salad as, suddenly, everything would taste of cucumber.

If someone cuts a cucumber with a knife and then uses the same knife to cut something for me, or if someone mistakenly places a bit of cucumber on my plate but then remembers and removes it before I receive my meal... I will taste it. YUK!

When my husband eats his salad-containing-cucumber, my nose goes crazy and my stomach just heaves.

I really have a serious adversion to those nasty green things.

Day 1 - cucumbers are lurking with the goal of destroying my juicing experiment before it even starts!

But I'm bigger than that. This is for the goodness of my health. This is my chance to finally take control. So I have no option but to suck it up (and swallow it down). Okay - of course there's another option to just ignore the cucumber bits in the recipes but I want to make a good go of this and give it what I have so in my eyes, this is not an option. (That makes me sound brave, doesn't it? I'm not...)

So I get out my big chopping board (I reckon I'll need a big one) and I start roughly chopping the fruit and veg listed in the recipes. There are a lot!

Today we have oranges, apples, pineapple, ginger, mint, cucumber, brocolli, beetroot, spinach, avocado... I think I left a few out but you get the idea... there's a lot!

Today and every day I shall start the morning with a little shot (it's my favourite ginger shot today... we won't even begin to think about tomorrow yet... go on, have a guess...), and during the remainder of the day I shall drink 2 x thin juices and 2 x thick juices/smoothies.

The thick juice is for breakfast and dinner. The thin juice is for lunch and afternoon snack (you can see the 3 different juices I'm going to consume today in the picture). Each juice is about 1litre so you drink about 500ml at each sitting (the picture above shows 500ml juices).

Juices made, I sit myself down with the thick green juice. No prizes for guessing... this is the one that has the cucumber. I have to be honest. I'm feeling nervous.

I have a quick sniff and, eeeeeewwwww!, cucumber! However... it's not as strong as I expected.

So I have a taste and, okay, I can taste a little cucumber but, surprisingly I'm not gagging as I would have expected. I think it's because the limes in the juice have taken over and softened (if limes can soften) the flavour of the cucumber to a bearable level.

I have to admit... I'm quite enjoying this juice. And actually don't mind the thought of having it again for dinner this evening.

A couple of hours later it's time to try the thin red juice. Now this one I'm excited about.

Well because it contains beetroot and I just love beetroot (pickled from a jar that is).

I take a sniff... it smells a bit on the earthy side... not sure I like that odour.

And I take a glug.

Hmmm.... it is drinkable. It's not too bad but it does taste quite earthy. I'm thinking the eartiness is coming from the beetroot (I've never tried raw beetroot before so can't really tell) but it also reminds me of what I think the outer layer of carrots (the part you scrap off) would taste like... and there are carrots in the juice. So I'm not sure. Actually maybe it's some of the earthiness from the outer layer of the beetroot coming through. The recipe didn't state that you had to peel the beetroot (that would have been super messy!)

I'm also not completely sold on this juice. I never thought I'd say this but the cucumber thick juice was nicer!

But I continue drinking it. It's really not that bad and I'm sure I'll acquire a taste for it.

My body tried to gag (gently in a fool-hardy attempt). I can tell it would be quite grateful if I would not put anymore of this juice into my body.

It's not gagging because of the flavour of the juice.

And it's not gagging because the it's reacting negatively to the juice.

It's gagging because that's what my body does when I drink something thin (other than water and, in the past, diet soda).

Suddenly my mind is transported to that one-too-many colonoscopies where I've had to down 2 litres of the most disgusting drink you could ever imagine. It's a continual fight between trying to hold it down and my body throwing it back up (my body won many a time)

I'd forgotten about that... until now.

When it comes to taking drugs, pills are what I do. Give me a pill (almost any size) and I'll swallow it like a soldier. But give me liquid medicine and I'm the drama queen of all drama queens (especially if I have to take more than a teaspoon).

I have to be honest. The juice is really not that bad. I'm starting to get used to the earthiness.

But my body just doesn't want to accept thin juices - it's just too traumatic, dreading up memories of the colonoscopy drinks.

But I persevere (with a helping hand from some water) and I make it.

I have to be honest, I expected the challenge of today would be hunger. But, actually, I haven't felt overly hungry.

Apart from the gagging, what I did feel at one stage (after the 2nd thin juice) was a need to chew. My body felt it was getting its food but my mouth felt left out and just wanted to chew something. So I let it. Now don't tut-tut me. I was good. I only took a small handful of macademias and that quenched my chew craving.

The other thing I have to mention is peeing. At one stage I was peeing like there was no tomorrow, running to the toilet every 15 minutes! I was still drinking the usual 1.5 litres of water I usually drink every day but I guess putting juices on top of that and, I suppose, some detoxing and...

So that's Day 1 done and dusted. What I expected didn't happen, what I didn't expect, did. Let's see what Day 2 has in store...