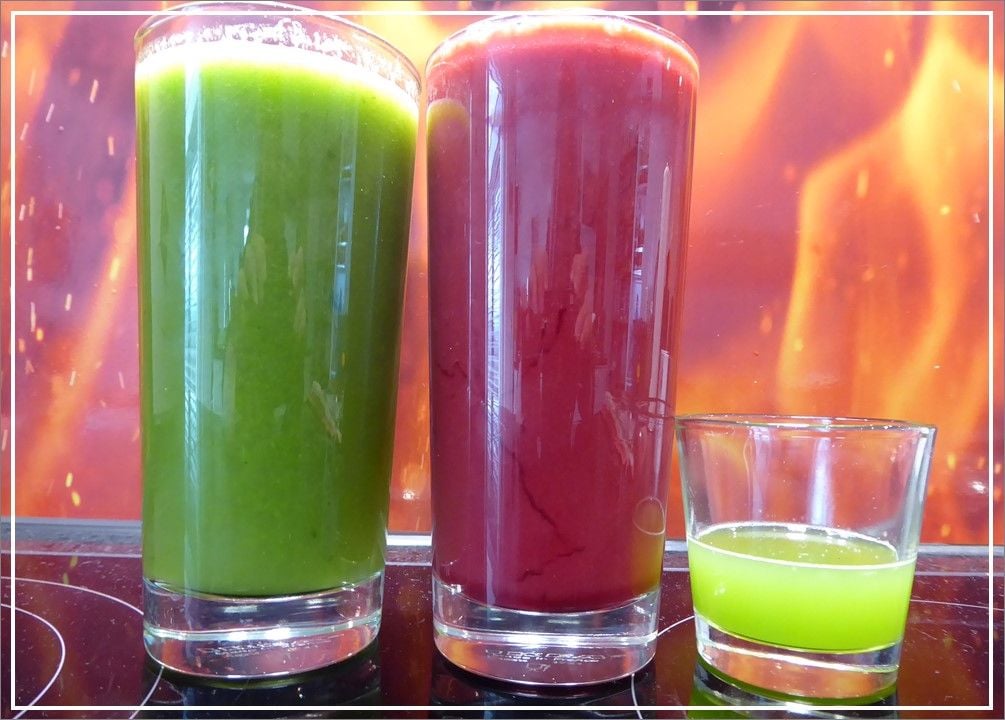 I started my day by waking up (always a good way to start your day). In other words... one day of juicing didn't killed me.

I woke quite early and felt pretty rested and ready for the day. Was that a result of healthy juices flowing through my system yesterday? I can't say... some nights I just sleep better than others and I think it might be a tad too early to start giving out juice awards.

I had a call at 10.30 so I decided to get all my juices prepared well in advance and have my shot and 1st thick juice consumed before the call.

That was the plan.

In reality I just about made my call and spent the time during it, slurping away at my breakfast (aka thick juice... the red one).

You see, I had a bit of a catastrophe in the kitchen. If you'd seen it after I'd finished you'd be right to think that a bomb had gone off. I'm new to this whole juicing malarky and using a new piece of machinery can come with some challenges. The challenge this morning was that the pulp decided to back up. Rather than come out the special shoot for pulp, it decided to get itself a bit stuck and soon everything was stuck, even the lid wouldn't come off my juicer. When it eventually did there was beetroot pulp flying everywhere. It really was quite a drama.

One thing I'll say about juicing, it's giving me a little additional exercise. I do try to go out a 20-30minute walk after each/most meals but now I'm also running up and down to the compost after each (double) juice I make (I learned yesterday that there's simply too much pulp produced for the pulp container to hold the leftovers of all that day's juices).

Other discoveries from today (so far) include:

I haven't yet tried my thin green juice (I hope it goes down smoother than yesterday). I'll update you when I do.

It's coming close to 4pm and I'm just back from the supermarket. I managed to get the rest of the fruit & veg for this week but had to do two runs to the car to carry it all into the kitchen (it really was that heavy! and it really was that much!). I'm hoping an additional beneficial side-effect of all this juicing will be biceps.

I've also decided we need to either

There was also a mild drama in the supermarket that I'm going to confess to.

I couldn't find any beetroot!

There was some fresh packaged beetroot but that had already been cooked (only raw, uncooked fruit and veg are juiced). I hunted and I hunted but there just wasn't any and, as it's mid-week, there weren't many staff around I could ask for help. I did, however, eventually find one very helpful staff member who repeated exactly what I had done - searched the veg area for the elusive beetroot.

He couldn't find it either.

By this stage I was praying to the Beetroot Angels (do they exist??) for my beetroot. I asked him when he thought the beetroot would make its return appearance in the supermarket and he ran off to check. Next thing I see is this beautiful glow of angelic light walking towards me... okay... maybe not. But what I did see was the same guy coming out of the storeroom with a tray filled with fresh beetroot. I think he was a bit bemused when I got very, very, very excited and thanked him profusely.

So I've come to another conclusion today about juicing... it turns you a little insane.

There have been some ingredients I haven't been able to get (eg kale... it's just not the season) and I've either left them out of the juice or substituted them with something similar. But there are other ingredients (eg beetroot) which are considered non-negotiables. They're so chockful of goodness that nothing else will simply work (or give your juice that amazing colour). These ingredients should come with a warning because, quite honestly, I believe if I was in the supermarket and there was one last pack of beetroot that both I and a little old lady wanted... I'm sorry... it would get very ugly and she wouldn't stand a chance. As for the non-negotiable, cucumber.. well that may not turn out quite as nasty...

As I write this latest update today, I drinking today's green thin juice.

On the plus side I'm not gagging like yesterday (though I haven't finished it just yet).

On the not-so-plus side it has cucumber in it and, I'm sorry, I still don't understand why such an horrible overpowering vegetable/fruit was ever 'invented'. Eeeewwww! All I can say is "thank you Mother Nature for limes" as they're definitely taking the edge off.

That's pretty much it for Day 2. I have another green thin juice and red thick juice to drink later today but I don't envisage anything too alarming or noteworthy happening. If it does, I'll be sure to let you know.