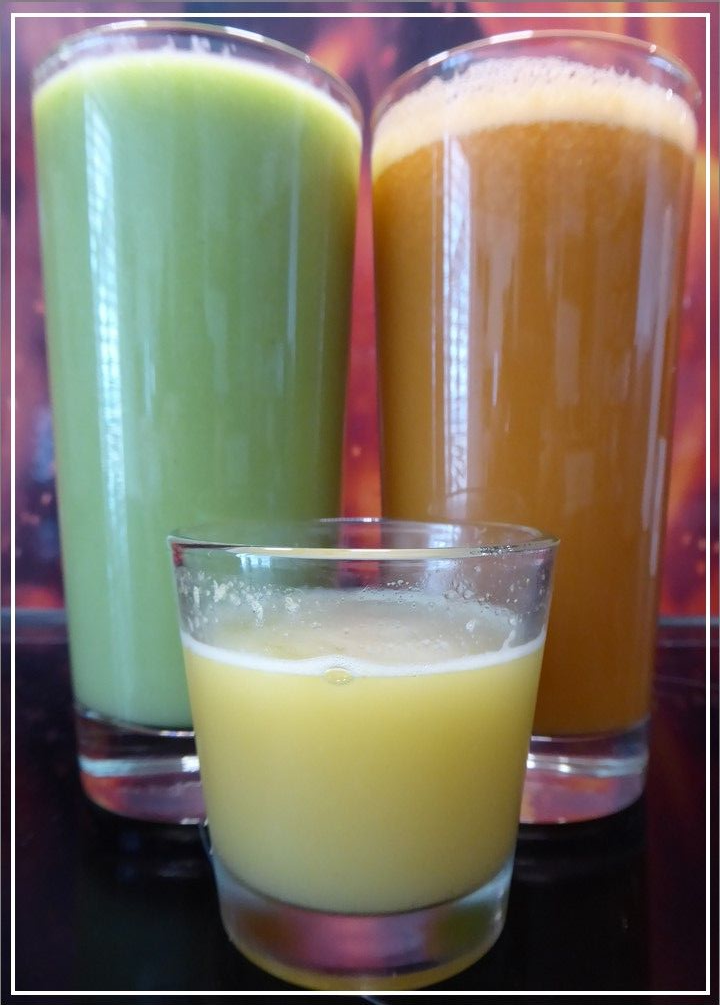 This morning I had a mild headache. I didn't wake up with it but when the sunlight hit me I could feel a headache come on. So I reached for a glass of water and sure enough, that calmed things down. I noticed yesterday I didn't drink quite as much water as I usually drink every day (about 1.5 litres). I think it was because it took me quite some time to make my way through all the juices. But also when you're detoxing (as you are when you juice) headaches can be normal at the start.

After yesterday's shopping spree to buy the remainder of this week's fruit and veg, I really was staggered at the amount I was consuming. Seriously... I'm not sure I could eat all this if I wasn't drinking it! So I thought I'd let you know exactly what I shall be consuming, today (only!)... it's quite a list:

I'm back kicking off today with my ginger shot... it's seriously yummy and gives a good kick.

For breakfast and dinner, a the thick green juice. It contains my nemesis, cucumber... but I have to say I can't actually taste it... YAY! Finally! And the juice itself is smooth, thick, and zesty. It's really rather yummy. I have to admit something though... I didn't put in the full quantity of cucumber. My thinking is, if I put in the full amount every day it's not going to take too long before I give up juicing... all because of one evil vegetable. So I've decided to still include it only not quite the full portion.

For lunch and my afternoon snack we're going orange today, thanks to carrots. Not a cucumber to be seen (or tasted) in this juice. However there is celery and whilst I don't have the same level of aversion I have with cucumber, I have to be honest and say I'm not a big celery fan either... too many memories of being at a friend's house and politely eating a meal I didn't enjoy that had cooked celery in it. If you ignore the celery part, this is not a bad juice. I'm liking the hint of warmth from the fennel and ginger.

I've started to notice a strange kind of feeling on the tip of my tongue today. It's hard to describe. It's almost as if it feels 'rubbed down', if that makes sense? I think what's happening is when I take a drink of my juice I'm rubbing the tip of my tongue against my teeth as if, somehow, to clean it (I have no clue why I'm doing this... don't ask) and that's making it feel a bit rubbed and 'flat'. Nothing big. Nothing to worry about... just an observation.

Also today I'm trying to be more mindful of when I'm drinking my juices. The last couple of days it's been as if I've just been drinking juice slowly and constantly with very little time between the end of one juice and the start of another (so I can get all my juices drunk in the one day). Ideally you're supposed to drink them as quickly as you would eat lunch/dinner etc and then have about 3 hours in between so your blood sugars are better regulated. And as I'm labelled as Type 2 Diabetic, it would be better to give my blood sugars a break between juices.

Last night, for example, I was having my final (thick) juice after 8pm and drank it until after 9pm, going to bed after 10pm. You're supposed to have it at 7pm... so I was about 2 hours late in finishing. This morning my sugars were a bit elevated (not much, just a bit) and I reckon the late drinking was the reason.

I'm also having the remember to record my sugar levels. I've forgotten a couple of times (or done it too late) and on the first night I even forgot to take my diabetic pill. When you reach for a juice it feels like you're just reaching for a drink and I have it in my head that recording my blood sugars or taking a tablet only happens when food is involved. Again... it's just a case of being more mindful.

One thing I read about the juices is that they're best consumed when fresh. But to stand and make the 4 tall-glass juices as and when they're due is just too time-consuming. So it is recommended you make the first 3 and then make the final juice at dinner time (purely psychological reasons - you're in the kitchen preparing your juice just as you would prepare your regular munching meal) but I make all mine in the morning.

As soon as juices hit the air and see light they begin to oxidise and start to lose their goodness so you need to bottle them and keep them somewhere cool. I did read that you should put them in a flask, away from light. I only have clear bottles so what I've decided to do is wrap a tea-towel round my bottles and then place them in the fridge. Now I have to admit I'm wondering if this is helping because when the fridge is closed, no light hits the juices anyway... but hey - they look cute all wrapped up.

It's just gone 5pm, my next thick juice is at 7pm but my body's craving a 'normal' meal. And out of all things I'm drooling at the thought of toast....

Another thing that has happened today is the sky stopped being all grey with continuous rain and it was dry with a blue sky. Which meant I could go out my short walks after each meal... I've been doing that for a while now - 20-30minute walks after breakfast, lunch and dinner because it's really good for your sugar levels (whether you're diabetic or not). But with the recent weather, a sick bunny, and life generally getting in the way I haven't been out for a good 1.5 weeks.

Thankfully today that all changed. And, so far, I've been out my post-breakfast and post-lunch walks. And... I'm pretty sure I had more energy. Certainly after breakfast I was practically running round my walk! At one point I was almost keeping up with a cyclist as we both headed up the same hill at the same time!