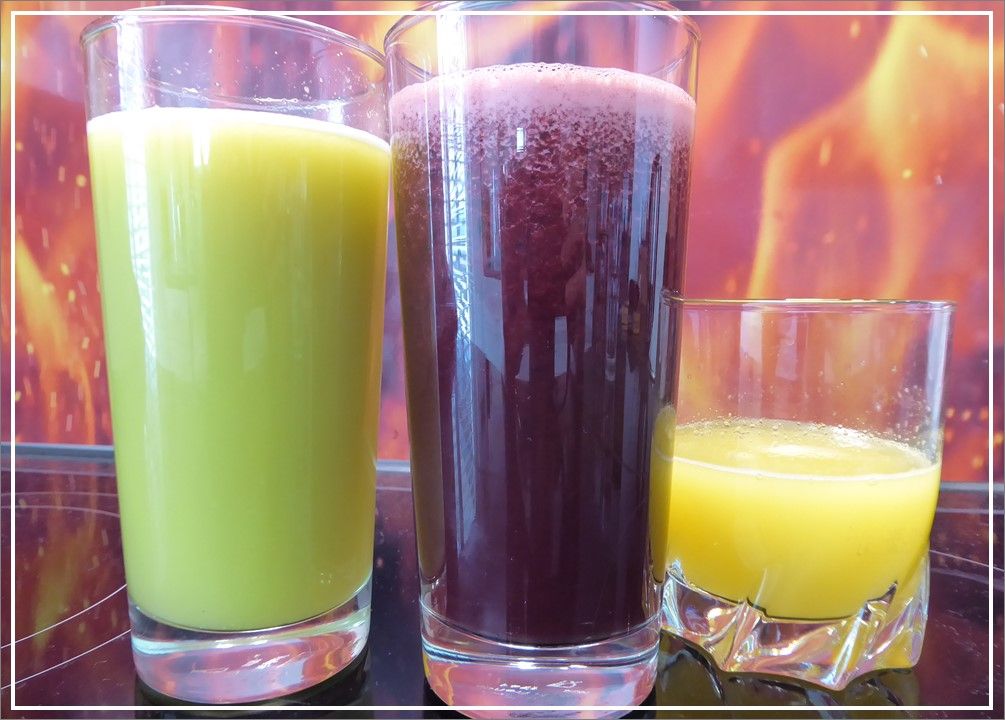 I am now pretty convinced that the juicing is having an effect on my mornings. Both yesterday and today I've wakened up and there hasn't been a struggle to get out of bed. I'm not saying I'm buzzing with energy but there's been a definite shift... which is good.

And today I'm feeling my legs ever so slightly. As if they're saying "We got up to some good yesterday". So I reckon my walking must have gone up a gear, as I had suspected.

This morning while juicing I made, not one, but two executive decisions.

Firstly, the shot for this morning was the cucumber & celery shot and, honestly, the thought of that just made me want to barf! So I decided the aim of the game is to get healthy and not put myself through hell in the process. So I made (and enjoyed) the ginger shot instead. This time I used a larger apple so it was a bit more than a shot but that didn't weaken the ginger kick... no siree!

My second executive decision was to make only one thin juice. I have to admit... I have been struggling to drink both thin juices. You're supposed to start drinking your tall juices from 9am but by the time I make them I don't start until at least 10am (which is my normal breakfast time anyway). Then trying to cram in both thin juices and still have a break before dinner's thick juice... well that has been easier said than done. I did drink my juices a lot faster yesterday but when I drink thin juice too fast it still makes me gag a little. So let's see how it goes with only one thin juice. Worst case scenario, I have to make the second thin juice during the day... no biggie.

Remember how I mentioned yesterday I was trying to be more mindful? Well that didn't quite work out as planned. This morning while I was making my juices, I looked over and saw my diabetic pill from last night still sitting... oooops... must try harder, Viv!

And we had another (minor) juicing drama this morning. While making the thick juice, the juicer seemed to create quite a bit of foam (which decided to start seeping out of the top). It was all a bit messy. I think it was a mixture of the pineapple and spinach. The pineapple is a very stringy food (bit like celery) and I find you need to juice these last or they may clog up proceeds a little. Spinach.. well that's a thin leaf and sometimes it can get a bit stuck. So the combination made for a bit more foam than I would expect. But it wasn't the end of the world. Nothing you can't wipe away.

Have I mentioned my skin yet? I don't thin so... Well there's no time like the present. I have spots of psoriasis on my feet and I stopped using my medicated (non-steroidal) cream when I started juicing. Now my psoriasis hasn't cleared up (I don't expect it to do so before the end of the 28 days), it's still very much there but it's not quite so flaky. But that's not the skin I want to talk about. I'm talking about the skin on the top of my arms. Now, in general, I have pretty good skin but at the top of my arms my skin can feel a bit bumpy at times. If I use a serum every single day, that keeps it under control but if I miss a few days, then we're back to bumpy skin. Anyway... I haven't been using my serum since I started juicing and my skin, this morning, didn't feel anywhere near as bumpy as it had done. Plus, I think, my face is looking healthier. It's hard to tell. I'll find out for sure at the weekend when my hubby comes home as he notices changes like that. I'll let you know what he thinks.

Apart from the mild headache yesterday morning, which cleared after I had some water, I haven't experienced anything negative (so far) from my juicing experience (apart from peeing every 15mins!!). No mood swings, no pains, no major hunger pangs. But I think this is because my body's been preparing itself for this for quite some time. A good 9 months ago (at least) I stopped eating meat (I have it very rarely) because it didn't sit right with me which means my meals have been lighter. For well over a year I've been reducing my sugar intake because I was diagnosed with diabetes. And in the last couple of months I've cut out diet soda (ie aspartame) completely. So I reckon that all got me in a relatively good place before even starting the juicing experiment.

Today's juices.... well I'm rather excited about today's thick juices because it's a blend of pineapple, apple, spinach, beetroot, blueberries, and banana. Not only does it taste pretty good (beetroot definitely brings a degree of sweet earthiness), it's a beautiful colour thanks to the beetroot and blueberries, but it's also high in antioxidants . Cucumber & celery (the touble-makers) made a appearance in the thin juice (I can't get away from these two!) but I decided to half their portion to reduce the 'flavour'. And, making its debut is asparagus (in the thin juice).... who'd have thought you could juice asparagus!!

I did find that the thick juice didn't seem quite as thick as usual and by 2pm I was more than ready for my thin juice. I had a big glass of water and put off having my thin lunchtime/afternoon snack juice until 3pm. So far, it's the nicest of the thin juices. There's something strangely unusual but interesting about the taste of sweet parsnip in a juice.

Apart form my first hunger pang this week (due to only 1 thin juice), it's been a good day.