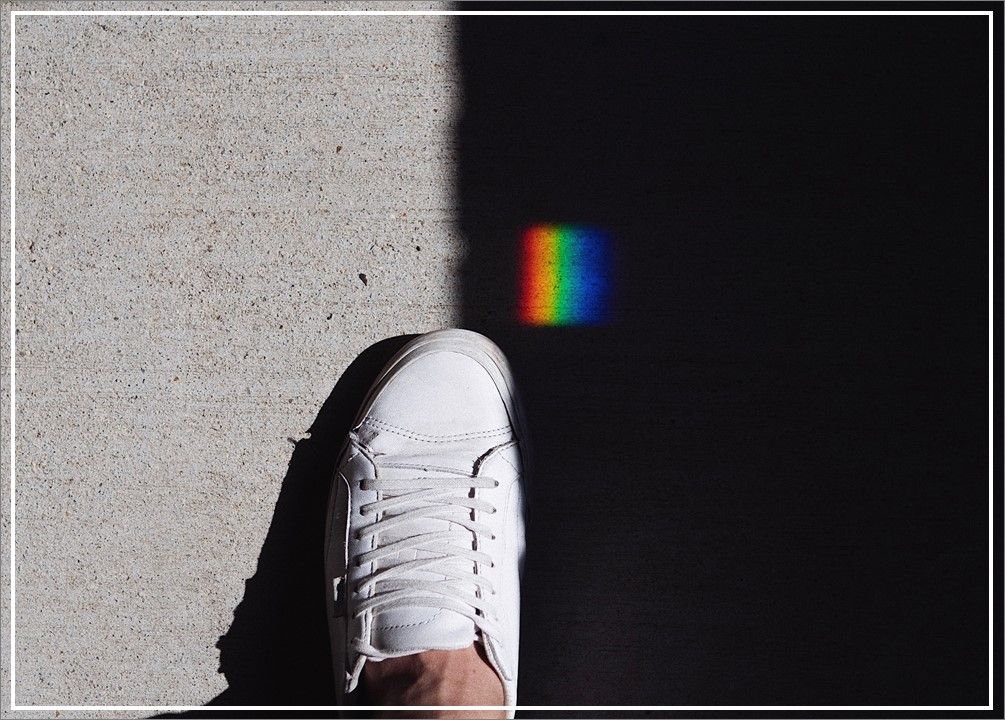 ... before I tell you all about my experience with rainbows, I just wanted to invite you to a free remote 1-question angel card reading.

I started seeing rainbows. They were almost everywhere at one stage.

When I first associated rainbows with angel blessings, I expected to see rainbows as I had defined rainbows to be in my mind - the arch of colours in the sky that appear after rain.

But that's not where I saw most rainbows. Because, quite honestly, there's not many countries in the world where it rains THAT much nor are my husband, bunnies and I are living in one of them.

There was a period of time when I seemed to see rainbows no matter where I turned. And that was when I was going through a recent health scare.

You can read all about my health scare in my blogposts "when the universe has your back" and "if that's what it's like to die ..." but, in short, I was sent for an unexpected smear test (after 15 -20 years of not being tested) which concluded that there was a virus and there could also be the presence of abnormal cells. A second smear test a few months later confirmed that these cells had 'changed and progressed' and a further, deeper investigation a few weeks later again confirmed that if these cells continued to change as quickly as they were currently changing, I would soon be diagnosed with cancer.

It was after I received the result from my second smear test that everywhere I looked I saw rainbows.

You see after the first smear test, I was kinda of the attitude "take everything in your stride", that everything would work out just fine because many women carry the virus that I presented positive with, and they don't even know they've had it; their body just fights it.

But when I received the results of second smear test, my world quickly crumbled. The words "changed and progressed" terrified me because I had since learned that this virus can turn cancerous if your body can't fight it.

I had a few weeks to wait between receiving the results of that second smear test until I went to the specialist for a further, deeper and more uncomfortable investigation. It was gonna be hard to stay strong, not panic and 'keep a brave face'. And, in truth, I did succumb and panic and spent many a day in tears of fear and worry.

However, within an hour or so of receiving the frightening results of that second smear test I was sitting quietly just trying to wrap my head around what the future might hold, when my eyes glanced down on my desk and there, shining brightly across my black wooden desk was the most beautiful rainbow.

Let's just get this into perspective a bit here... before this occasion I had never seen rainbows except those in the sky and they were few and far between. So to have one shine so brightly across my desk brought me immense comfort in that moment as I could sense the support and love from the angels, spirits, and loved ones who'd crossed over, through it.

But the comfort lasted only an hour or so before I felt I was drowning in the what-ifs of the situation and just panicking.

So, thanks to the angels and the messages of support they so dearly wanted me to receive, that was not the only rainbow I received that week. Every day I ask the angels for a message through my oracle cards and that week was the first week I drew a card called "rainbow blessings" and, no surprise, the primary symbol on the card was a rainbow.

The angels were confirming to me that they were with me, they were supporting me, and that everything would turn out as it was meant to be.

Again later that week, I was sitting in our bedroom and my eye was attracted to something on the bedroom wall: a rainbow that was being reflected as a result of light shining through the glass crystal hanging to our bedroom light.

And yet I was still scared. I still could not fully trust.

But the beautiful thing about angels is that they're non-judgmental. I had asked for their support in the situation and even though I struggled to quiet my panicked mind, they continued to lovingly let me know that they were there with me through the many rainbows that crossed my path.